What used to be one of the more sad placed of the castle, situated on the second floor, has been transformed into in to a fairylike stay, where five people can bond and relax together. The tower residence with its two beds has its original walls and windows. The old wooden sealing is the ground the immense network of wooden bars that holds the three building layers together. This makes it the best place for the adventurous type, due to wind and storm, causing the frames to move and creak. Not long ago this was a home for the church owls.

Via the central hall and the majestic stairwell, you can enter this residence from the porch on which the toilet/shower with sink is located. Also the pantry, and a large refrigerator with a freezing compartment are placed there.

A few steps up, and you will find yourself in the kitchen part of the living room. From this simple kitchen, build of natural materials (containing a fridge, oven, cooking plates and a porcelain sink), you can see the northern part of the park and the lake. The four roof chapels let the morning sun come inside, brightening the room with summer collars of the interior. In the end of the living compartment, lies a romantic sleeping alcove with a double bed.

From the living compartment a stair will bring you to a entresol, where two other sleeping compartments are hidden away in silence. They can also be used as playground for the children. This residence has been equipped with a TV, DVD-player and a well filled bookshelf. Smoking is not allowed inside the building. 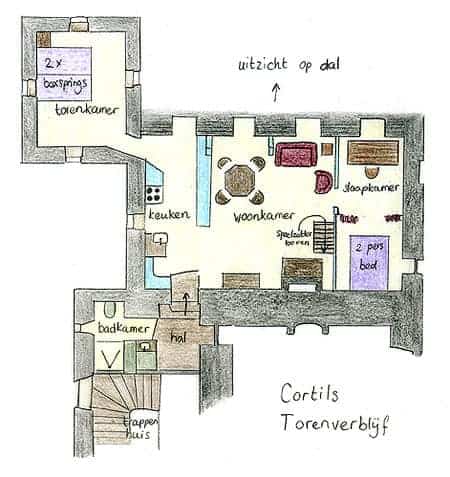 1 hand brush and can

Use can be made of 1 central washing machine. This is in the general scullery. Here you will also find cleaning material if necessary.

Any cookies that may not be particularly necessary for the website to function and is used specifically to collect user personal data via analytics, ads, other embedded contents are termed as non-necessary cookies. It is mandatory to procure user consent prior to running these cookies on your website.